Would you like to know a bit more about the history of the Citadel of Namur, the historic fortress classified Exceptional Heritage of Wallonia?

The Citadel of Namur is located on a hill at the confluence of the Sambre and the Meuse. This strategic position, at the crossroads of several communication routes, has rendered it a crucial spot in Europe. The fortress’s role was to defend and monitor this crossing point. For centuries there has therefore been much competition over the place.

Although the site has been occupied on an ad hoc basis since prehistoric times, its military function is not attested until the 3rd century AD, with the construction of a pile barrier and the digging out of a natural gully so as to make it a defence ditch.

In the Middle Ages, a fortified residence was erected at the tip of the rocky bulge. It was gradually transformed into a real castle.

This castle at the time was comprised of two parts: the castle itself and a dam wall located in front. The castle was surrounded by towers and high walls. Inside its enclosure were the residence of the counts of Namur, a collegiate church bordered by the houses of the canons, one or more aula (reception rooms), a great tower, a bakery, a cellar, stables, chapels, falconry, wells, water tanks ... The second part, located beyond the protective ditch, is made up of a wall and four towers. This defence wall bars the base of the rocky bulge between the Sambre and the Meuse. Of these two parts, only the general look of the stronghold remains: three towers, sections of walls and some vestiges of the enclosure.

From 1519, the conflict between Charles V, emperor of the Low Countries, and François I king of France leads to a real arms race. This has the effect of accelerating the improvement of artillery and the development of fortification techniques. A new form of defence appears in the form of underground construction plus bastions. The main characteristic is that of lower, wider walls covered with a layer of earth. In Namur, a bastioned front known as the Median is erected at the top of the castle. It includes a courtine (curtain wall) and two bastions, each with a casemate. Despite later modifications, the shape of these constructions and of the casemates are still visible.

At its highest point is a large hornwork flanked by two half-bastions, while a full bastion protects the Sambre side. Here the ditch and the layout of the fortifications can still be seen.

Over the centuries, defence efforts have focused on the heights of the hill to overcome the two main weaknesses of the Citadel: the La Foliette ravine which allows attackers to approach under cover via a gentle slope, and the lower parts of the Citadel area which favor the attacker who is arriving from above there.

After several demilitarization campaigns and partial and episodic reconstructions, the last major fortification works of the Citadel took place between 1815 and 1830. Following the Napoleonic conquests and the French defeat in Waterloo, the territory of Belgium was attached to the Netherlands. The decisions taken at the Congress of Vienna had the objective of ensuring that France remained within its borders. A new belt of fortresses was erected for this purpose. The Citadel was then rebuilt by the Dutch, partly following the set-up of the old ramparts. These renovations are quite visible since about 90 per cent of the Citadel as we know it today dates from this period. 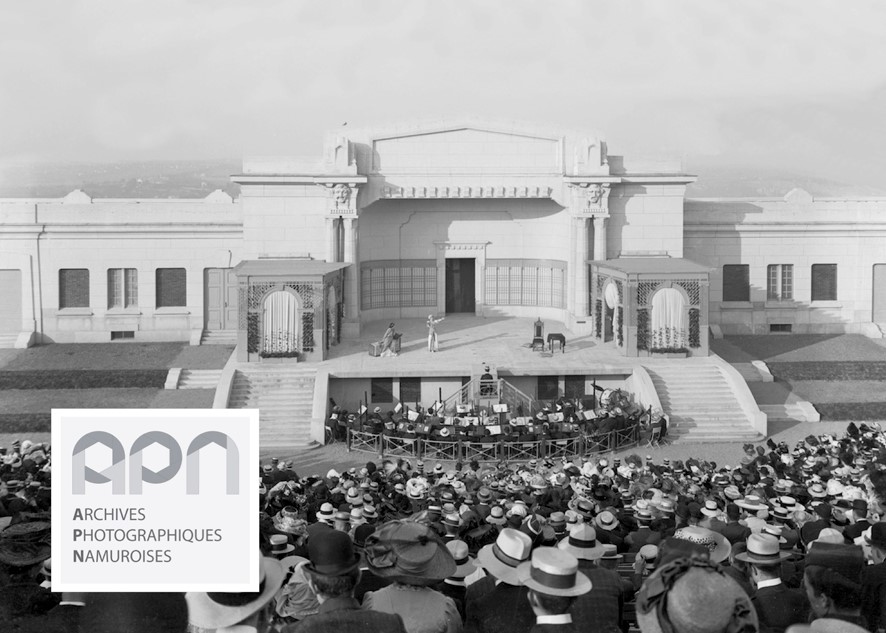 From the end of the 19th century, the construction of nine concrete forts around Namur made the Citadel useless as a defence tool. It was thus turned into a leisure and walking venue

On the heights, a hotel was built as well as a games stadium and an open-air theater. These provide for the organizing of recreational, cultural and sport events. The pediment of the stadium bears the Latin inscription Ludus pro patria, 'Games for the Fatherland'. Access to the site was facilitated by the construction of two scenic routes, a tram line and a funicular. Only the parts called Median and Terra Nova retained their military function. They mainly served as barracks. The Citadel nevertheless played a final military role during the Second World War as the command post of the defence line of Namur. The last military regiment left the site in 1977.

Under these fortifications, underground galleries were built in several stages between the 16th and the 20th century. Originally about seven kilometers and now roughly four kilometers long, the underground passages of the Citadel of Namur constitute one of Europe’s most important citadel networks. The most prominent military engineers of the period have worked on their construction, such as Sébastien le Prestre de Vauban (French, 1633-1707) and Menno van Coehoorn (Dutch, 1641-1704)

You can now visit the Citadel of Namur in different ways. You can discover it on your own by a walk in the wooded surroundings. The Terra Nova Visitor Centre offers a journey back in time, a history of Namur and its Citadel through films, plan-relief models and documents. A tourist train allows you to explore the site while enjoying superb views over the Sambre and Meuse valleys, accompanied by an audio guide. The guided underground tour takes visitors on a walk through the Citadel's military past by diving into its very bowels. The visit is accompanied by video-mapping projections and other installations that enrich the experience and make it more fun.

The Citadel of Namur is a testimony to millions of years of geological history and two thousand years of human history. Visiting the place is an opportunity to go through the ages and become familiar with a supreme example of military and cultural heritage.